Simple Greece Itinerary: Ideas for Planning One Week in Greece

Thousands of years of history. Greek mythology. Gorgeous islands and beaches. Ancient ruins. Delicious food. Greece has a lot to offer! The varied landscape appeals to all types of travelers, whether you enjoy mountains or beaches, big cities or small villages. While the language might not be so easy for those of us who use the Roman alphabet, you will find plenty of friendly people who know a handful of English words in the touristy areas. The following Greece itinerary will help you start planning your trip to this wonderful country. How much of Greece can you see in a week? Read on! 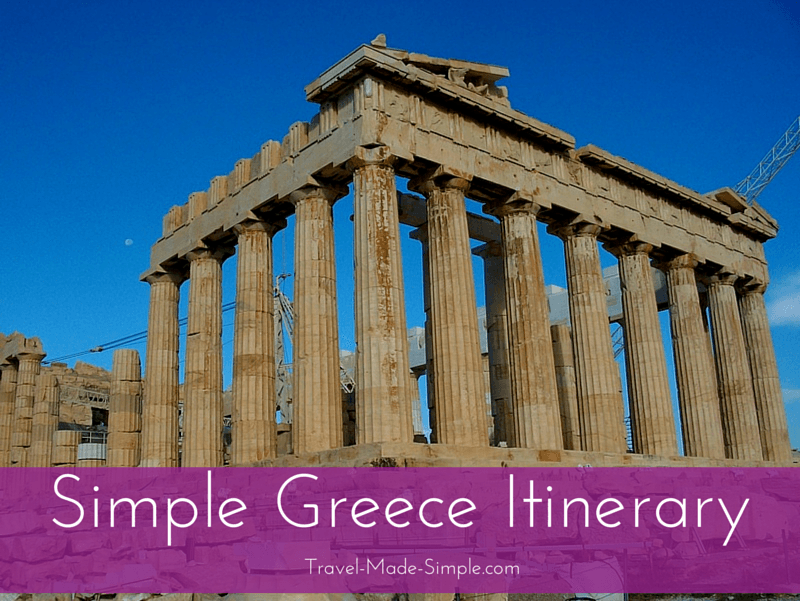 Greece has a lot to offer both on the mainland and on the islands. But you can’t see the whole country on one vacation, so your best approach is to pick a few places and spend a few days in each.

When visiting multiple islands, it’s usually easier to stick to one island group rather than going from one group to another. Remember that it takes time to get from one city or island to the next, and work travel time into your schedule.

One week in Greece is probably enough time to explore one or two islands, visit Athens, and maybe do a day trip from Athens. Or you could visit Athens and a few other parts of mainland Greece, and maybe add in one island. Keep reading for more details about your options and decide what type of Greece itinerary works best for you.

One of the oldest cities in the world, Athens is not to be missed. Spend a few days exploring impressive ruins and soaking in the history of the ancient Greeks.

Athens can also make a good base for day trips to nearby areas. We typically recommend no more than 2 to 3 hours one way for enjoyable day trip distance, but there are exceptions. Check out hotel reviews in Athens here.

We love Take Walks for great tours in European cities. Check out their tours in Athens here and find one that will enhance your trip! 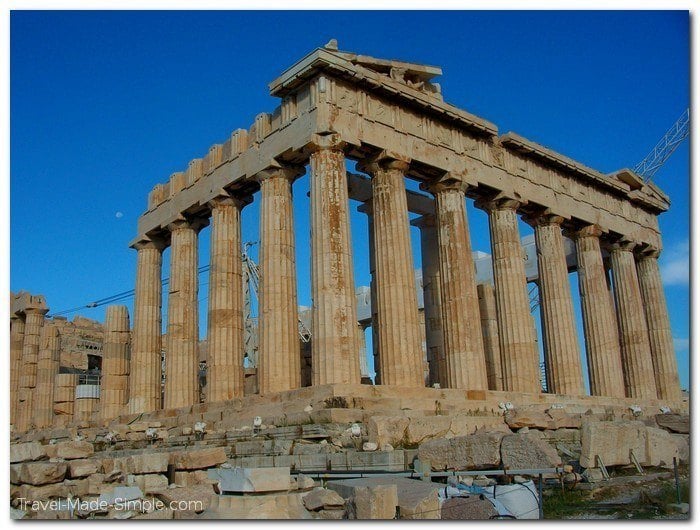 Delphi was once concerted the navel of the world. It’s where people came from near and far to ask the Oracle for advice. The advice was purposely vague and interpreted through a priest. There are also theories that she inhaled toxic fumes that came up from the ground while she was giving out her advice.

The ruins are impressive and the views of the surrounding mountains and valleys are breathtaking. The scenery is just as much a reason to visit as the history of the ruins.

Visiting the ancient ruins can be done as a simple day trip from Athens on your own, but I recommend taking a guided tour of Delphi to learn about its history and to avoid transport stress. 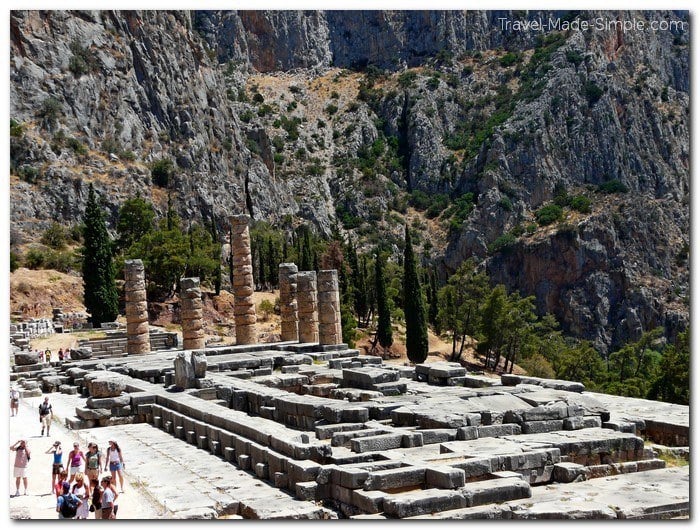 The area of Meteora is a series of monasteries built on top of imposingly high rocks. Monks built the monasteries during the Turkish occupation in order to protect themselves. At the time, they were only reachable by baskets pulled up by rope.

It is said that if it wasn’t for these monasteries, Greek culture and history would’ve been lost, and modern Greece would be a reflection of the Ottoman empire.

Meteora is a little far from Athens to do as a day trip, but if that’s all you have, this day tour from Athens could work.

If possible, stay overnight in the nearby village of Kalamaka. You can get a taxi to the monasteries and hike back to town if you want.

If you want a more guided option, consider taking this half day tour of Meteora from Kalambaka to get a good look at the monasteries. Another good option is to combine Meteora and Delphi with this two day tour, which starts and ends in Athens. 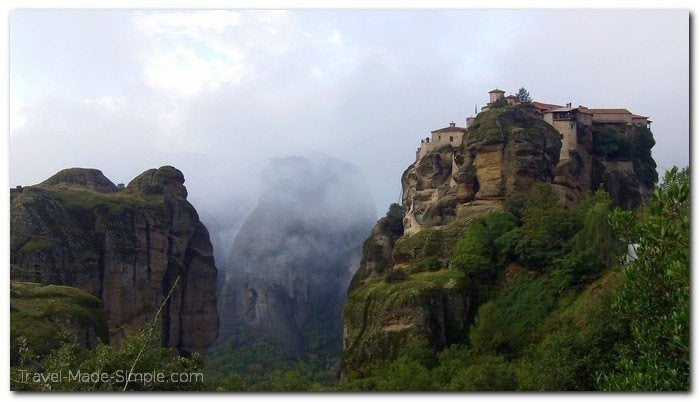 Santorini is the most famous Greek island, know for its gorgeous sunsets, white washed buildings and bright blue domed roofs. It’s in the Cyclades island group, so it’s fairly easy to get from Santorini to one of the nearby islands, such as Mykonos, Naxos or Paros.

Search for a great hotel in Santorini here.

Looking for an adventurous island experience? Check out this review of a Greek island hopping sailing tour! 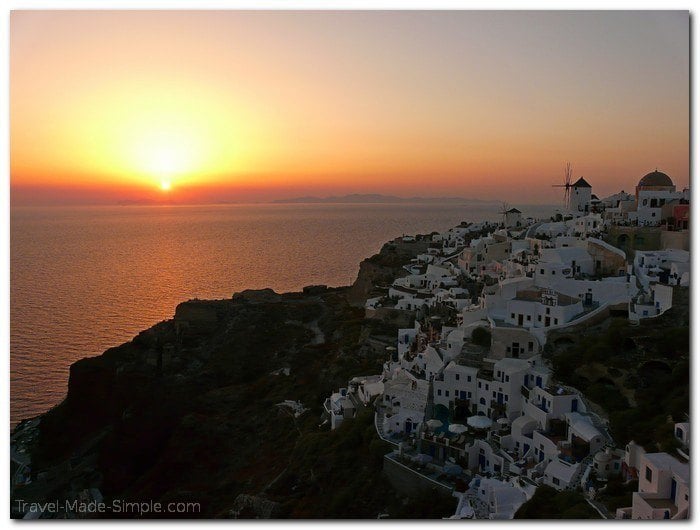 The Cyclades are an island chain in the Aegean. This is probably the most popular island chain for vacationers and party-going backpackers, but don’t let that stop you from exploring. Santorini is the southern end of it and one of the gateways to the islands.

This is a short list of some of the islands. There are plenty of others each with their unique sights. White washed town streets and shady cafes looking over blue waters are standard scenery.

Ferries link most islands and there are airports on both Mykonos and Santorini. Spring and fall are the best time to come when weather is reasonable and there aren’t as many tourists. Summer is hot and crowded and a lot of things are closed in the winter (including some of the ferry routes).

The most famous islands in Greece are in the Aegean, but they are not the only islands in the country. The Ionian Chain is off the west coast toward Italy.

These islands are in the Eastern Aegean near Turkey. This area has been ruled by different groups over the centuries, like the Turks and the Italians as well as the original Greek, and it shows in the various architectural styles.

Greece’s largest island of Crete sits south of the rest of the country in the middle of the Mediterranean. It is said that it is diverse and different enough from Greece that it could be its own country.

If you want an island place to explore but without having to get on a boat all the time, you could easily spend several days in Crete, or even an entire week in Greece on the island of Crete.

Crete was the center of Minoan civilization and the place of several myths including the Minotaur. The capitol city of Heraklion has a Venation fortress and the former Minoan palace at Knossos as well as a number of museums.

The island has many natural beauty spots and a diverse set of landscapes to explore. Beyond that, there are a number of towns with their own feels spread about the island. The island has plenty of resorts as well, but it is worth exploring the real island even if you are there mostly for the sun and the beach.

Want to explore Crete with a tour?
Search for tours in Crete here. Some tours take you to parts of the island you might not normally get to on your own.

While the islands are very popular destinations in Greece, there are plenty of other interesting things on the mainland as well.

Athens is the easiest entry point into the country, so I recommend starting your trip there. You can fly to some of the more popular islands like Santorini, but there is a certain charm to going by boat. It just takes a bit longer that way, especially if you’re going farther out like to Rhodes or Kos.

Many of the smaller ferry routes are more limited (or closed) in the winter. Even in the summer, schedules seem fluid in Greece.

Pireaus is the ferry port near Athens that has links to most destinations in the Aegean. Patras is on the western coast of the mainland and has links to the Ionian chain of islands as well as overnight ferries to Italy. Check out our post on transportation in the islands.

While exploring mainland Greece, if you don’t sign up for day tours, you can get around by long distance bus or train depending on your destination, but bring your patience (and a snack) because things don’t always run on schedule. 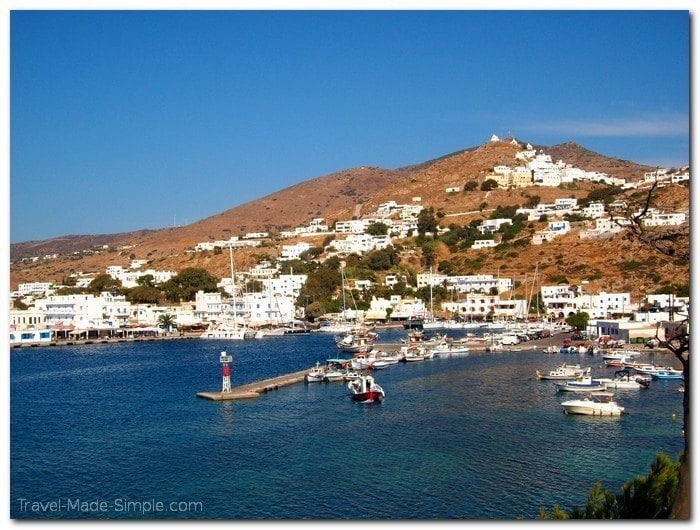 Planning a trip for one week in Greece

Choose a few destinations for your Greece itinerary and enjoy them. As always my advice is to travel slowly. Take into account the time it takes to get from one place to the next. This is especially true in Greece.

Pretty much expect to use most of a day to move long distances and note that certain ferry routes leave very early in the morning. Even if transport is on time and you have extra time to explore a city, it is better than missing a tour or flight. Day trips that include bus transport can be quite helpful if you want to see a lot with your time.

If you really enjoy cities, consider adding a day or two in Athens. On the other hand, if you’re more of a beach person, consider adding time to you stay on Santorini or go island hopping throughout one of the island groups. Enjoy the beauty, the history and the food in this wonderful country. 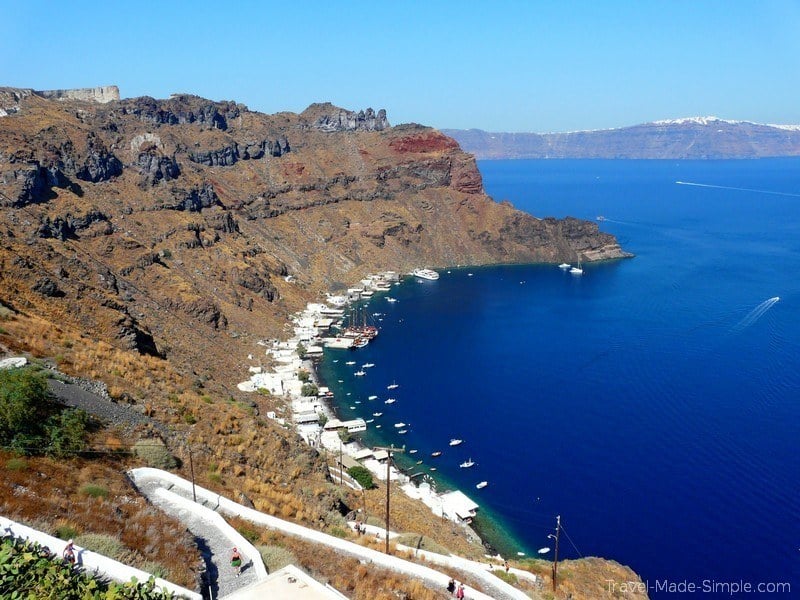 Sample Itinerary for One Week in Greece: Islands

This is a very island focused idea of a week. You could easily stop at an additional island in the Cyclades for a night instead of 2 in Mykonos if you were willing to deal with moving around more and work with they ferry schedule to make it happen. Read our post on island hopping in Greece.

1 Transport Day: Ferry or fly to Mykonos. The Blue Star Ferry leaves at 7:30am and takes 6 hours. There are several flights a day from Athens as well.

2 Days in Mykonos: Explore town with the windmills and the winding streets.

2 Days in Santorini: Head out to the Volcano one day and up to Oia the next day to catch the sunset.

Sample Itinerary for One Week in Greece: Mainlands

Alternatively you could aim to explore the mountains and sights on the mainland. Head up to Thessaloniki for a different city to explore.

2 Days in Meteora/Delphi: There is public transport that gets you to Meteora and Delphi, but they are odd schedules and long rides. It is great freedom if you have an extra few days to spend, but if you do not, look into a combination tour from Athens like this one.

3 Days in Thessaloniki: Take the express train or a long distance bus north to Thessaloniki. Explore the old buildings and food of Greece’s second city and take a day out to experience the nature and beaches on Halkidiki peninsula. 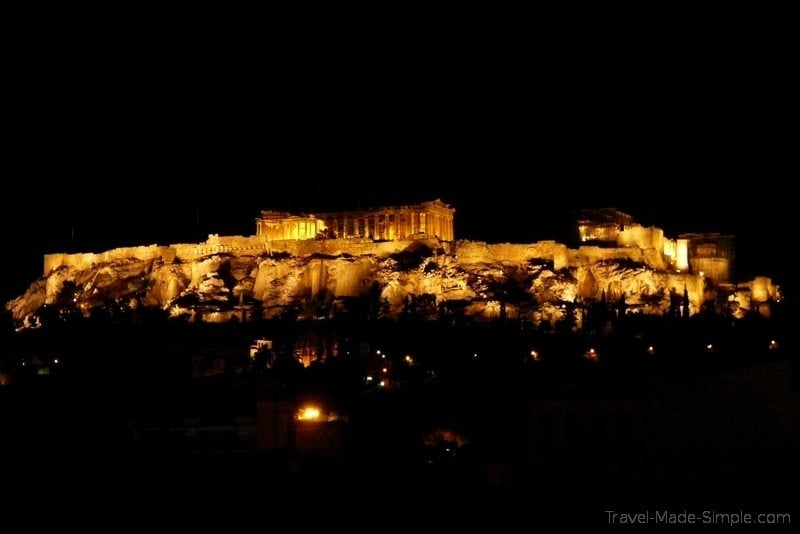 Hopefully our Greece itinerary and ideas for planning one week in Greece have been helpful. The following posts provide more in-depth information about Greece travel, tours in Greece, and specific cities and regions. And if you’re looking for a little inspiration, be sure to check out the books and movies recommended below.

Read more about traveling in Greece:

Looking for other great destinations? 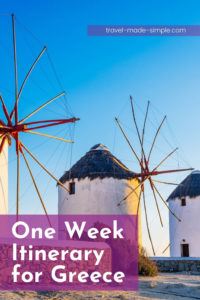 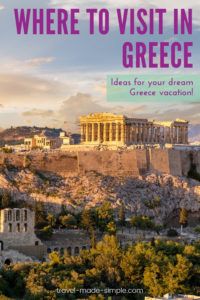 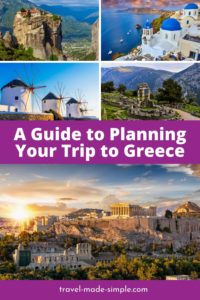 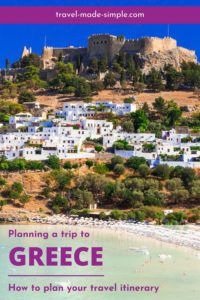 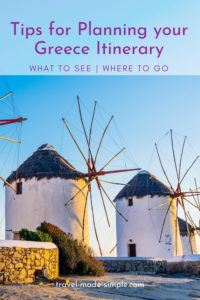 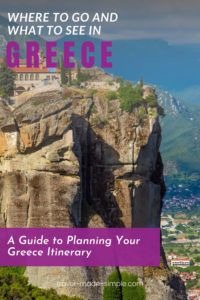 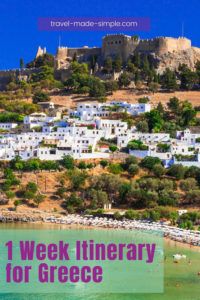 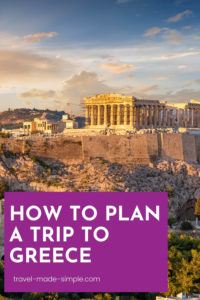 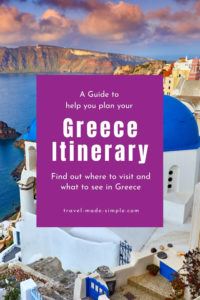 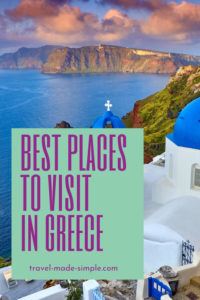