This is part of a series of interviews with inspiring travelers. Today’s interview comes from my husband Andy Couch, who also works on this site with me, about his Greek Islands sailing tour. See more about tours and tour reviews here. All photos are by Andy Couch.

Independently I have been traveling since I was 16, so quite a many years. I studied abroad a number of times through high school and college and did travel as a part of those experiences.

I traveled alone a lot and realized I didn’t really like it. I enjoyed being around others, so I started seeking out interesting tours. 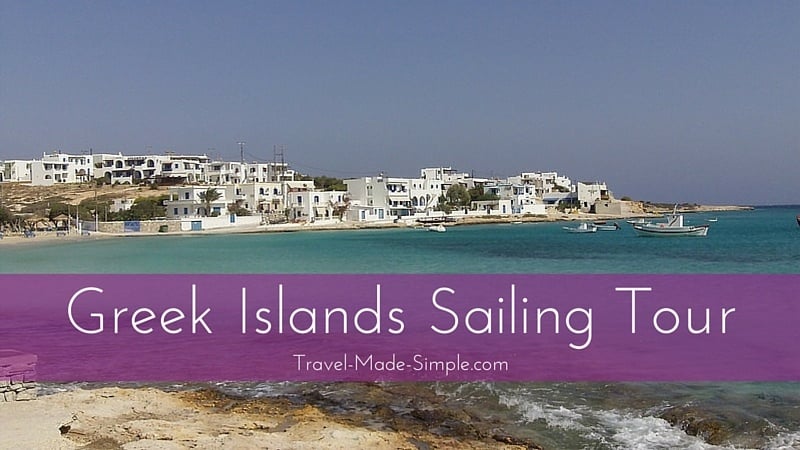 I did a sailing tour through the Cyclades in Greece. It was a small group (only 4 of us plus the guide) but also a small ship.

We started in Santorini and made our way to Mykonos stopping at a different island almost every day. The tour was 7 days long.

G Adventures – I liked the idea of the sailing ship. I looked around at other companies, but some were on bigger boats and some even used large cruise ships. They all also had some poor reviews related to the ships.

G Adventures had some great reviews for the trip and the dates all worked with my plans. 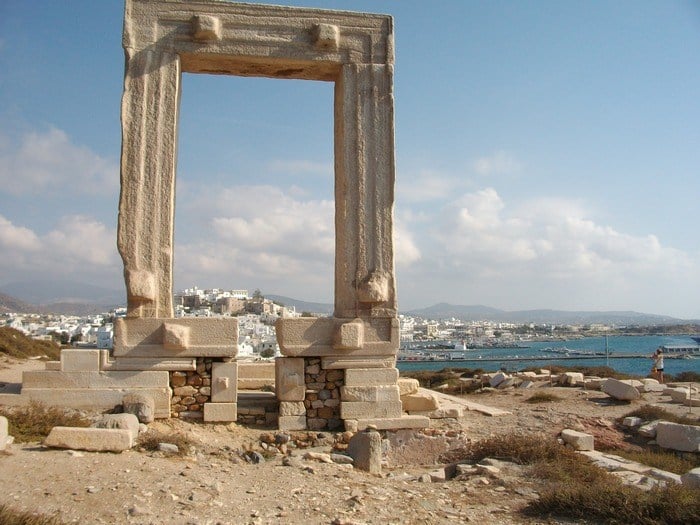 There was no way I could do a ship tour like that as an independent traveler. I also liked the idea of being with a small group of people. I sometimes get lonely traveling by myself and it is nice to be with other people.

What did you like about the Greek Islands sailing tour? What was your favorite part?

I liked seeing all the different islands and hanging out with my shipmates on the boat with a cold beer. It wasn’t a super active trip, so a little bit of exploring on each island and the rest was pure relaxing.

What was the most memorable or eventful part of your trip?

Towns on these islands grow organically, so long straight streets don’t really exist. It is all windy whitewashed streets with (to me) identically looking doorways.

The other guy and I spotted a church on top of the hill at Ios and set out to climb to it. We got lost in the town for a while and so just coming out into the church plaza felt like a great accomplishment.

As much as I enjoyed having my own space with 4 of us on an 8 person boat, I think I would have liked a few more people in the group.

So many lamb gyros, but the most amazing thing was a dish of scrambled eggs in tomato sauce at a place on Ios. It sounds weird, but I really enjoyed it.

I have read some of the Greek classic literature. Homer’s Odyssey and such. The idea of being on the Aegean in a sailing ship was appealing.

And Greek islands just look amazing. The trip was also my first flight in nearly ten years, so I wanted something so amazing that I wouldn’t back out from the flight.

Yes, I would definitely recommend this tour. I would take this type of tour again for sure, but I would pick a different island chain. Not that the Cyclades are bad, but I’ve seen them and would want to see something else next time.

I would definitely make sure it was a warm time of year, but not super hot. We were lucky to each have our own cabin. I would see if I could do that again.

Do you think this tour would be good for a new traveler?

A strong maybe. This not a tour based on luxury. The ship was nice, but the cabins are still very small in comparison to hotel rooms and showers are all but non existent. We showered off the back of the boat in our swimsuits most days.

It was a fantastic trip, but for someone completely unused to travel it could be a little overwhelming. That said, for someone who is new to travel but really into feeling adventurous it could be a good thing. Cabins are shared, so try to bring a friend you know you can get a long with in close quarters for a week.

Interested in this Greek Islands sailing tour? Click here to book this tour, or for info on other tours offered by G Adventures.

Bio: Andrew is a board game creator, fantasy fiction author, world traveler and expat who resides in Berlin, Germany. He has been a fantasy book nut since childhood; he really has not grown up much since then. After struggling to write his own games for years, he is now creating fantastical worlds in a series of novellas that echo the TV shows, anime and role-playing games of his youth. He also blogs about traveling in Germany, expat life, and travel on Grounded Traveler.