How Do Layovers Work?

Layovers can be stressful. Whenever possible, I prefer nonstop flights, even if they’re a little more expensive. But sometimes the price difference is too big to justify, and sometimes it’s just not possible to get where you’re going without a connecting flight. So how do layovers work? What happens with your checked luggage on a layover? Do you have to go through customs and immigration if you’re only in the airport for a layover? Here’s everything you need to know about layovers and how layovers work to help make your journey a little less stressful. 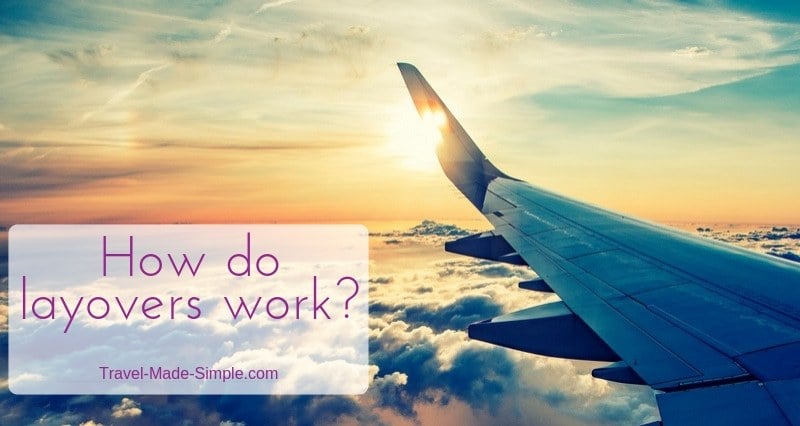 How do boarding passes work with layovers?

Assuming you booked both flights together on one itinerary (as opposed to two separate itineraries) you will get both boarding passes when you check in for your first flight. When you land at your layover airport, you need to look at the departures board and find the gate for your next flight.

If your itinerary is entirely with one airline or even two airlines that are partners, in most cases, you will get both boarding passes when you check in for your first flight.

But if you used a booking engine and your flights are with two different airlines, especially airlines that aren’t really partners, you might only get your first boarding pass when you check in.

Then, at your layover airport, you’ll have to find a ticket counter for the airline that operates the second flight to get your second boarding pass.

Not sure if your flights are with partner airlines? Just ask at the ticket counter when you check in if you will be getting both boarding passes or if you will need to get the second one at your layover airport. They’ll tell you what to do.

>>Check out these layover perks you never knew about.

What happens with checked luggage on a layover?

For domestic layovers, your checked luggage will be tagged to your final destination, so there’s nothing for you to do while on your layover. Your bags will get taken off the first flight and loaded onto the second flight.

For international layovers, this varies depending on the airport and the country where your layover is.

If you fly from somewhere outside the US or Canada to an airport in the US or Canada, you will have to collect and recheck your luggage no matter where you’re going on your second flight.

In most other countries, as long as both of your flights are on the same airline or partner airlines, your luggage will get transferred from the first to the second flight for you.

Again, if you’re not sure, just ask the agent when you’re checking in if you will need to collect and recheck your luggage at your layover airport.

Avoid luggage worries by learning how to pack light and travel carry-on only! Check out the best carry-on luggage.

Do you have to go through border control/immigration and customs on a layover?

This only applies for international layovers. Whether you have to go through immigration and customs really varies on the airport and the country.

As with checked luggage, if you have a layover in the US or Canada, you will have to go through border control at the first point of entry into the US or Canada, even if your final destination is somewhere else.

So for example, if you are flying from Europe to Mexico with a layover in the US or Canada, you will have to get your passport checked and fill out the customs form, as well as collect and recheck your luggage, even though you’re not staying in the country or even leaving the airport.

You are a transit passenger if you are not leaving the airport and not staying in that country. In this case, you often don’t have to go through immigration or customs. Look for a sign that says transit or transit passengers or transfer or connecting flights.

I’ve been able to do this in many airports, such as Singapore, Abu Dhabi, and Bangkok, and there are many more. If you don’t go through border control, you’re not technically entering that country.

However, if you have a really long layover and you want to go check out the city, you will have to go through immigration and customs in order to leave the airport.

Transiting through the Schengen Zone

Transiting through the Schengen Zone can be a little different since a flight from one Schengen country to another is considered domestic.

So for example, if you’re flying from the US to Paris and then onto Rome, you will go through immigration and customs in Paris but not in Rome.

If you have two layovers, it gets even trickier.

Let’s say you’re flying from the US to Frankfurt to Rome to Istanbul. When you arrive in Frankfurt, you will have to go through border control.

This is because domestic flights, which includes your flight from Frankfurt to Rome, are in a different section of the airport, so you’re leaving the international section and entering Germany, even though you’re not leaving the airport.

It’s usually pretty obvious once you arrive. When you get off the plane, look for signs that say transit, transfer, or connecting flights. If you don’t see any, and the only option leads you to a passport check line, then you really don’t have a choice.

If you want to know ahead of time, ask the agent when you check in, or even one of the flight attendants on your first flight, if you will have to go through immigration and customs on your layover.

Do you have to go through security on your layover?

Like most things, this varies on the airport. The simple answer is you will probably have to go through security.

On international layovers, even those where there is a transit area, you will most likely have to go through security.

Some airports in other countries have security checks for each individual gate or a small group of gates. In this case, you will have to go through security again, but it should be a short line.

There’s also the chance your first flight lands in the same area your second flight leaves from, in which case you might be able to stay within the secured area and not have to go through the security check again.

For a better travel experience, check out these 30 airport hacks every traveler should know from my friend Eden at Mint Notion.

Do you need a transit visa for your layover?

Some countries require certain nationalities to get a transit visa in order to transit through the airport. It doesn’t happen often, but it’s worth researching before you book a flight with a layover, or at least before you board the flight.

The US requires transit visas for many nationalities, unless your nationality is on the list eligible for the visa waiver program. For more info, see here and here.

Since this is such a complicated area subject to variations based on your nationality, the country you will be transiting through, and how long your layover is, do a few online searches and check the website for the embassy of the country where your layover is to see if you need a transit visa.

If you’re still not sure, it’s also a good idea to check with the airline or even contact the consulate or embassy of the country you will be transiting through before you book your flight.

Whenever possible, I think it’s best to avoid layovers that require transit visas since there’s usually a fee involved. The hassle of filling out an application and paying a fee for a country you’re not even really going to just doesn’t seem worth it.

Make sure your layover is long enough, and don’t let layovers get you stressed out. Hopefully these tips and explanations of how layovers work will help you transit smoothly from one flight to another.