Our second Tokyo food tour was in the Meguro neighborhood, and it had lots of food that we didn’t see in the first tour. Food was one of the things that both frightened and intrigued us when we planned our trip to Japan. We don’t eat sushi and don’t read Japanese, so I feared it would be difficult to eat. To combat this, we went on five food tours during our 3 weeks in Japan, including two food tours in Tokyo.

We booked hotels in two neighborhoods in Tokyo and did tours in both to see the diversity. Meguro is a much quieter district (though “quiet” is a relative thing in Tokyo) than Shinjuku or Shibuya, despite being only a few metro stops from both. This tour showed us a bunch of little hidden local spots along with a great local guide.

Tokyo is huge. No, bigger than that. And yet, each neighborhood feels like it has its own spirit. Meguro felt more like a residential area rather than the business district of Shinbashi or the overwhelming lights and shopping in Shibuya.

The main street we walked a few times during the tour was lined with restaurants. Our guide named it Ramen Row. Seems like a good basis for a neighborhood.

When I was planning our trip, this tour intrigued me mostly because it was in a neighborhood that I had not read much about. This is still Tokyo and feels very much like it belongs, but with a different vibe and fewer tourists.

This is what I wanted for a second food tour in this city. New foods and new experiences. Taking food tours was such a great compliment to seeing lots of landmarks in Japan.

>>Read about the food tour we took in Tokyo’s Shinbashi neighborhood.

We took the Tokyo Wonderland tour by a company called Oishii, which is the Japanese word for “delicious.” Our guide was a nice young woman from Tokyo with a good sense of humor and flexibility as I asked all manner of crazy questions.

Traditional Tempura with a Fun Gimmick

The first stop on our Tokyo food tour in Meguro was a typical looking izakaya with brown curtains and a lantern hanging outside. We learned that this lantern means there will be food. This was helpful to know as we traveled later.

Up some steep stairs we went, dropped our shoes at the top, and sat at low tables. It was early so we had the whole upper room to ourselves. This place specialized in tempura, one of the most popular foods in Japan, so our guide described the types we would try. Then she showed us the super fun practical gimmick of this place.

Orders are written on little bits of paper which are then put into gumball machine type plastic capsules and then dropped into tubes spread around the floor. Each table had a basket of numbered balls. The wait staff brought food up, but it meant that you could order at any time without having to wait for someone to randomly come around.

I need this in more restaurants. It also felt so wonderfully Japanese to me: whimsical, almost childish, and modern mixed with traditional.

Hidden on the Seventh Floor

“Hidden food” is sometimes bandied about in descriptions of food tours and really just means down a road normal travelers might not go. This tour really did find hidden places.

Our next stop was hidden on the seventh floor of a nondescript building with really nothing on the elevator button to say what we were headed into. Even stepping off of the tiny elevator into a super small place felt almost like invading someone’s living room. And then the wonderful smell hit and everything was ok.

Here we split Hiroshima style Okinamiyaki. We learned later while in Hiroshima that the word means “whatever, fried”. No wonder there are so many different types, but the Hiroshima style is one of the most well known.

Expect layers of ingredients including cabbage, noodles, eggs, usually some kind of meat and/or fish and/or seafood, batter and sauces all grilled together.

As with most food tours, beyond the food we got bits of Japanese culture here. The restaurant had its own theme song which played occasionally in the mix of the music.

There were little whimsical touches everywhere as well, like a tiny deer to rest your chopsticks on. All of this in a nice restaurant and not at all the only place we encountered on our trip like it.

We had gotten through three days in Tokyo without trying ramen. There were so many other tasty things to try, and you really only have so many meals in a day.

So when our guide led us into the basement and showed us a machine in front of a shop, I was both excited and hesitant. Seriously, good food from a basement place and ordered from a machine?

Well, we had already passed several bars in the basement level full of happy people and the ramen place itself was full. (Not hard given only eight seats, but still a good sign.)

We learned in our travels that there are a lot of different styles of ramen, but I have no clue what we had that night. It was so tasty and felt so authentic eating in a fluorescent lit basement with a scattering of people in suits.

One wonderful thing we had been seeing, but was really obvious here, was that ice water is standard on the table almost everywhere. Big jugs of iced water and stacks of cups meant not having to ask for tap water, and we never forgot to stay hydrated. Considering how cheap and plentiful alcohol was, it was nice to have water.

The last place was so secret, I don’t even know how to describe it. I remember a secret door hidden behind what looked like a book case. This led to a busy room with enough curtains and corners that you felt private in your own table despite the sounds of others around. Desserts and drinks rounded off a wonderful evening.

Our Thoughts About the Tokyo Food Tour in Meguro

We have taken a lot of food tours over the years. This was definitely one of the better ones. Plenty of food and a great variety of it. I didn’t feel hungry on the way home.

Each stop was well chosen with a distinct dish we were trying. The restaurants were unique and definitely not places we ever would’ve found on our own.

Our guide was friendly and open and had a lot of fun information both about the food and the culture. This really was a top notch tour.

Who is this tour good for?

I would recommend this tour if you are staying on the east side of the Tokyo ring and want to see a different side of the city not very far from the bustling Shibuya and Shinjuku. If you don’t plan to go to Hiroshima, this okinamiyaki stop tasted exactly like what we had in the city of its birth.

This Tokyo food tour was a wonderful addition to our trip, and it was so much fun to see two completely different neighborhoods in the city. 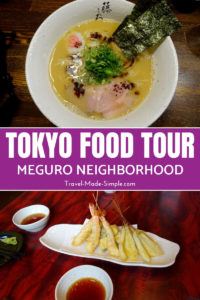 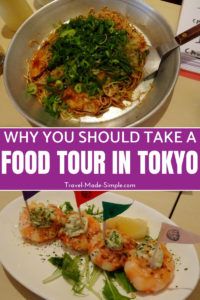