Itinerary for 3 Days in Atlanta, GA

The following itinerary for 3 days in Atlanta comes to us from Caroline Eubanks. All photos are by Caroline.

Atlanta, Georgia has plenty of nicknames, just don’t call it “Hotlanta.” The city had its origins as the terminus of two train lines and became the state’s capital. It’s known for its sports teams and music industry, but is gaining popularity as a filming location for Hollywood blockbusters. The concrete jungle is part of the appeal, but be sure to branch out into the historic neighborhoods that date back to the period after the Civil War.

Here’s how to spend 3 days in Atlanta.

Most travelers start their time in downtown, the heart of the city and where the majority of the attractions are clustered. In a five-block radius, visitors can access the Georgia Aquarium, World of Coca-Cola, Center for Civil and Human Rights, College Football Hall of Fame, Centennial Olympic Park, and the CNN Center.

The Georgia Aquarium is one of the largest in the world by tank volume and has incredible creatures from the region and beyond, including whale sharks and sea otters. It’s probably one of the best things to do in Georgia.

The World of Coca-Cola is an interactive space detailing the Georgia-born company’s rise to global notoriety.

Visit the Center for Civil and Human Rights, which covers the Civil Rights Movement and modern struggles in the LGBTQ and immigrant communities.

If you’re a college football enthusiast, check out the College Football Hall of Fame. It has exhibits on SEC football teams and simulates the experience of tailgating.

The CNN Center is the worldwide news leader’s headquarters and offers tours where visitors can spot tapings in the studio. Nearby Centennial Olympic Park was the hub for activity in the 1996 Olympics and continues to host concerts and other events.

Many of these attractions offer discounts through the Atlanta CityPass.

While you’re in the neighborhood, catch a glimpse of the Royal Peacock, a historic venue where America’s African American musicians performed, and the Sweet Auburn Curb Market, a historic market and food hall.

If time allows, join one of the city’s tours. Atlanta Food Walks tells the story of the city’s history through its food, including visits to a soul food eatery where civil rights leaders planned marches.

Many movies and TV shows were filmed in Atlanta. Check out tours to visit the filming locations for The Walking Dead, The Hunger Games, and the Marvel Cinematic Universe.

End your day with a view of the city from above. SkyView Atlanta is a Ferris wheel with glass pods for viewing the city day or night.

If you’d prefer something stationary, grab a drink at one of the high altitude bars like Polaris at the Hyatt Regency, the Sun Dial at the Westin Peachtree Plaza, or the SkyLounge at the Glenn Hotel.

>>Check out more USA itineraries and tour reviews on Travel Made Simple.

For your second day in Atlanta, branch out to the northern neighborhoods. In Midtown, fans of Gone with the Wind can tour the Margaret Mitchell House, where the author lived while writing the book.

Then continue to the High Museum of Art, one of the country’s foremost art museums that spans from Renaissance triptychs to contemporary works.

Stretch your legs at Piedmont Park, the city’s largest green space. It was designed by the Olmsted Brothers, sons of Frederick Law Olmstead, and hosts music festivals, outdoor movies, and sporting events. The Atlanta Botanical Garden is also within the boundary of the park with an incredible orchid house and works by Dale Chihuly.

Hop on MARTA, Atlanta’s public transportation system, to go to Buckhead, a neighborhood home to art galleries and trendy boutiques. It’s the starting point of the Peachtree Road Race, the largest 10K race in the world.

You could easily spend the entire day at the Atlanta History Center, a sprawling complex that contains exhibits and historic homes. The main museum has exhibits on the city’s history, including the Olympics, the railroad industry, and folk art traditions.

The center also has the Cyclorama, a large-scale painting of the Battle of Atlanta during the Civil War. Visitors stand on a moving platform to see it in its entirety.

>>Read: When is it Worth Booking a Tour?

On your final day, head to Grant Park, the city’s oldest neighborhood with a namesake park and charming bungalows. Inside is Zoo Atlanta, the city’s oldest attraction that has red pandas, rhinos, and African elephants. Check out the Atlanta Citypass for skip the line tickets into the Zoo as well as the Coca-Cola experience and others.

Then head across Memorial Drive to Oakland Cemetery, a Victorian-style cemetery that is the final resting place of notable Atlantans like Margaret Mitchell and Bobby Jones.

The Old Fourth Ward is named for a previous system of organizing the city and contains some of the trendiest spots in Atlanta.

Ponce City Market is the former regional headquarters for Sears and remains one of the largest brick buildings around. It’s since been converted to a stylish food hall and shopping district. From here, you can walk up to The Beltline, a rails to trails path that winds to Midtown and beyond.

If time allows, make a detour to the Jimmy Carter Presidential Library and Museum, located between Poncey Highlands and Little Five Points. It honors the president from small town Georgia with exhibits on his life and legacy. There’s even a replica of the Oval Office and his Nobel Peace Prize.

There’s no “high season” in Atlanta as there’s always something going on. Spring is busy with festivals and events, but pollen can affect the comfort of travel. Summer months are very humid so visitors may not be used to the temperatures. Fall and winter are ideal as they are both mild in the city.

Where to Stay in Atlanta

When it comes to finding accommodations, the best hotel options are found in Downtown, Midtown, and Buckhead, including big-name brand hotels where you can use loyalty points. All three are convenient to the highway and public transportation as well as attractions. But if you’re looking for rentals or boutique hotels, try areas like Poncey Highlands and Old Fourth Ward, which are walkable.

Search for hotels in Atlanta.

Getting To and Around Atlanta

The Atlanta airport is a major international hub, so it is well connected to other parts of the US and the world by plane. However, if you’re on a budget or you don’t like to fly, it’s also well connected by bus. Each day there are several buses from NYC to Atlanta, for example.

Atlanta is sprawling and its traffic rivals Los Angeles, so if you decide to drive, bring your patience and create a time buffer. MARTA offers trains and buses that cost $2.50 for each ride of any distance. You can also rely on rideshare apps, bike rentals, and scooters. Some neighborhoods are walkable, but the city isn’t overall.

I hope this helps you plan your 3 day itinerary for a trip to Atlanta!

About the author: Caroline Eubanks is an award-winning writer from Atlanta and the author of This Is My South: The Essential Travel Guide to the Southern States. Her work has been published by Afar, BBC Travel, USA Today, and Fodor’s, covering the food and travel of the Southeast USA. Check out her site This Is My South. 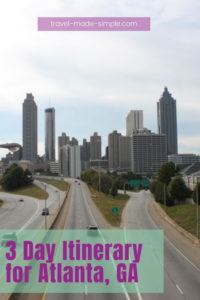