Understanding Food and Beer in Munich

Do you like beer? How about pretzels and sausage?

Food and beer in Munich is totally these things and more. You can find plenty of meat and potatoes and more than enough beer, but there are traditional dishes you might not find as authentically done elsewhere.

This post is a quick guide to eating and drinking in Munich. It is mostly about types of food, but there are a few specific recommendations at the bottom. 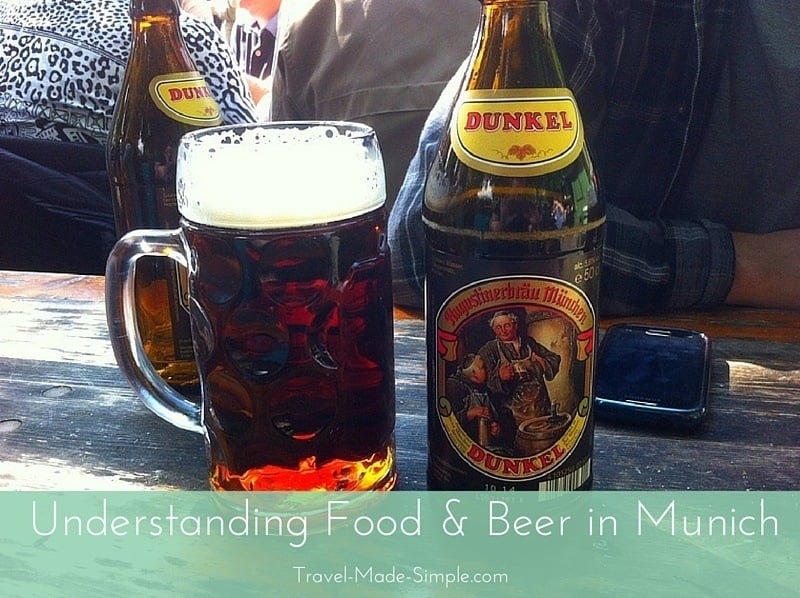 Germany is associated with sausage, right? Sure, but the country runs more on its bread than on meat. Bakeries are on nearly every corner and offer a range of pastries, rolls, and sandwiches for only a few bucks.

And of course the venerable pretzel. Every bakery in Munich worth the name will offer pretzels, maybe several types.

While pretzels are synonymous with Germany, they are actually only native to the southern parts of the country like Baden and Bavaria. A standard bakery pretzel is what we might call a “Soft Pretzel” in the States, about 6-8 inches across sprinkled with salt.

In Munich though, you can get giant pretzels well over double that size. These monsters can be slung through women’s arms at the beer gardens like a second purse. These aren’t even for tourists, but are perfectly normal part of locals’ diet.

If you have a massive pretzel, what are you going to eat with it?

In Munich the answer is usually Obazda. This is a cheese concoction made of several types of soft cheese and spices including paprika which gives it a yellow to orange coloring. Break off a bit of pretzel and slather on some Obazda.

Beer is a part of Munich life as just about anything else, including breathing.

Pick up a copy of the guidebook Oktoberfest on a Budget: More Beer for Your Buck, written by a Munich local.

These are the main types you might encounter in town:

This is what you might call “standard” beer. It is a light transparent yellow color with a frothy head. It is a hoppy drink and more than half of all beer brewed in Germany.

Normal beer is made with malted barley. If you add wheat to the mixture, you get a Weizen beer. It is often unfiltered, giving it a cloudy appearance which is the yeast left over from brewing. The taste is usually sweeter than a Pils and are served in tall curvy glasses.

If you roast the grain when making beer, you get a dark brown beer. This can either be a normal barley beer or a dark wheat beer (“Dunkelweizen”).

Bock is a type of beer made usually in winter and spring. It started its history as a bread substitute by monks for getting through Lent. The beer is very strong (8-12% is common) in comparison to normal beers (~5%). It has a rich, usually dark, feel to it and can be sweet enough to disguise the high alcohol, so be careful. This is the primary beer of the spring Starkbierfest (Strong Beer Festival) in Munich.

This is a beer mix of half lemon soda and half beer. It is quite popular in the summer.

Note: Beer in Germany is stronger than beer in the US. This is especially true of the Bocks. It is also served in much bigger mugs. Half liter mugs are the standard, though one liter “Mass” mugs are nearly ubiquitous as well. Know your limit, take it easy, and be sure to have some food.

How to use a beer garden in 3 easy steps

Munich is a great city to explore the culture of Beer Gardens. This is a great map of them in the city with information and prices. Every one is slightly different, but there are some general rules that are very common.

1) Order at the window
Unless you are in a special area of a beer garden, there is usually no table service. Look for a window where people are lined up. There is usually one person taking orders and another slinging suds.

2) No private tables
Usually a beer garden is filled with long tables and benches. These are shared tables. If you see a few seats open, ask politely if they are free. If they are, sit and enjoy your beer.

It is normal to share tables and not uncommon to talk to others on the table, but not at all mandatory. Be ok with being ignored.

3) Know about Pfand
Pfand is essentially the German concept of a deposit. Usually you will pay a deposit on the glass/mug/stein with your beer and even on the plates if you order food. You can return the glass to get your deposit back.

Sometimes you get a small plastic chip with your beer. This is the marker that you got the glass here and will need to turn it in to get your deposit back.

Beyond Beer and Bread

A lot of German food is based on meat and potatoes, but you will find that side salads are pretty common as well, so you do get your vitamins. Here is a quick look at some of the specialized things you will find in Munich.

Slow cooked pork is a German thing. Schweinehaxen are roast pig knuckles, while Schweinebraten are another cut of pork usually with a crispy crust on one side. Both are slow cooked in sauce to make them soft.

White sausages are a very Bavarian thing. They are only served for breakfast (tradition is important in Munich, so don’t try to order it after noon) with a sweet sticky mustard, a pretzel, and a beer. They are cooked in hot water and you remove the skin before eating.

You probably know the phrase “Wiener Schnitzel,” which is a thin pounded piece of meat breaded and fried served with a slice of lemon. “Weiner” means Viennese, or from Vienna, in German.

Munich isn’t actually that far from Vienna, but Schnitzel is definitely a German staple as well. Although the meat is usually veal in Vienna, it is very common to find pork schnitzel in Germany.

If it doesn’t mention the meat, then assume it is pork. If it says “Weiner Art” that means in the Vienna style, breaded and with a lemon wedge, but made with pork instead of veal. “Kalb” is the word for veal.

Bread is so important in Germany that every region has their own word for the basic little bread rolls. In Munich that word is Semmel. Semmelknödel are rolls that have been soaked in liquid and cooked to make dumplings. Knödel is the word for dumpling, of which there are several other types as well.

Called Fleischkäse in other parts of Germany, it is a smooth paste of meat that has been cooked. That description, while accurate, doesn’t do the thing justice.

Think of hot dogs or even a smooth meatloaf if you must, but then think high quality meat. It is eaten either with egg or as a sandwich on bread.

This is actually an Austrian dessert that is common enough in Munich and is even eaten as a main dish. Thick pancakes are ripped into bits and fried golden brown and then covered in sauce. Raspberry is common, but so are other things.

The Viktuelienmarkt is a market area right in the middle of old town Munich. It is mostly a maze of shops that sell all manner of food.

This is a place to stock up for a picnic, explore the types of food available, or just grab a sausage on the go. Among the fixed stalls is a bar which claims to be the smallest in Munich.

The center of the market is dominated by the shaded beer garden. It is owned by the city of Munich and rotates beer types. There is a small serviced section, but it is mostly self-service.

Also, in contrast to the rules above, the last time we were there the standard mugs did not have a deposit. Despite its location, this is definitely a place for locals as well as tourists.

Check out this post at Grounded Traveler about our day at the Viktuelienmarkt.

In the streets around the Viktuelienmarkt are restaurants with a mix of touristy places and not so touristy places. If the weather is crappy enough to keep the beer garden closed, there is a beer hall owned by the Pschorr brewery in the large enclosed hall at the far end of the market.

Bratwurstherzl (in German) – We liked this place, just a block from Viktuelienmarkt, that served traditional food in a homey feeling place. The schnitzel was good. They set a basket of bread/pretzels on the table. Be aware that there is a small charge for each piece you eat.

Augustiner Keller – You have probably heard of the Hofbrauhaus, which is a beer hall in the center of town. Augustiner is another brewery in town and, for my money, a better experience. It is near the train station and yet has a decent menu and a beer garden.

Das verrückte Eismacher (Facebook page) – If you are here in the summer and like crazy ice cream, hunt out this place that literally translates as “the insane ice cream maker.” Pictures of Alice and Wonderland on the wall complete the decor. And crazy goes from peanut crunch to champagne sorbet to salmon ice cream. Yup, fish. We didn’t try that one. It does seem to be full fat ice cream rather than the lighter gelato style you usually find in Europe.

Looking for more about food in Munich? Search for food and beer tours in Munich here.