Can you take batteries on planes?

With all the electronic devices we travel with these days, it’s no wonder people ask, can you take batteries on planes? Batteries come with certain hazards, so the rules about taking batteries on a plane are in place for safety reasons.

The rules vary depending on the type of batteries and whether you’re packing them in carry on baggage or checked luggage. Keep reading to find out more about batteries on planes, plus info about power banks and chargers.

Since certain types of batteries pose a fire risk, they are often required to be in your carry on bags. Batteries in checked luggage have a lot more restrictions, if they’re even allowed.

But batteries in hand luggage come with their own rules and limitations. Let’s dig into the different types of batteries and what is and is not allowed.

These are simple. Dry alkaline batteries are probably the most common kinds of batteries you have around the house. This includes AA, AAA, C, and D batteries, and also rechargeable dry batteries.

TSA allows dry batteries in carry on luggage and checked luggage. They don’t list any kind of limits, so theoretically you can pack as many as you want.

But the FAA also states that you are only allowed to bring batteries for personal use. This means large quantities that appear to be for resale would not be allowed in either carry on luggage or checked luggage.

The FAA rules for lithium ion batteries on a plane are a bit more complicated.

These are the types of batteries typically found in laptops, cell phones, tablets, and other small consumer electronic devices. Flying with lithium batteries is usually possible, but the rules depend on the watt hours of the battery.

You can pack lithium batteries in carry on luggage as long as they have 100 watt hours or less. This is the kind of lithium ion battery you probably have, but always verify before you fly.

You are also allowed to bring spare lithium batteries in carry on luggage as long as they are protected from damage and short circuit.

Lithium batteries with 100 watt hours or less are allowed in checked luggage only when they are still attached to a device. The device must be completely shut off, not in sleep mode.

This means if for some reason you had to pack your laptop in checked luggage, you have to power down your laptop before packing it. Loose lithium batteries are not permitted in checked bags.

But seriously, pack your laptop, tablet, and any other electronic device in your carry on baggage if at all possible. You don’t want to risk your laptop getting damaged or stolen while in transit, and the airline won’t claim any responsibility for damage to things like laptops.

You can only pack this kind of lithium battery in your carry on baggage if you get airline approval ahead of time.

Two spares are allowed in carry on luggage with airline approval and they must be protected from damage and short circuit.

You are not allowed to pack lithium batteries in checked luggage if they have more than 100 watt hours. This goes for batteries attached to a device or loose batteries.

Lithium metal batteries are non-rechargeable batteries. These are also permitted in carry on bags, as long as they contain 2 grams or less of lithium per battery.

Loose batteries of this kind are allowed in carry on luggage as long as they are protected from damage and short circuit.

You are also permitted to bring lithium metal batteries in checked luggage if they are in a device. But loose batteries of this type are not permitted in checked baggage.

You can bring non-spillable wet batteries on a plane in carry on luggage, as long as each battery does not exceed 12 volts and 100 watt hours.

Two spares are allowed, as long as they are protected from damage and short circuit, and they must be in strong packaging marked “non-spillable” on the outside.

According to TSA rules, non-spillable batteries are permitted in checked baggage.

Spillable batteries are prohibited in both carry on luggage and checked luggage.

Please contact your airline for rules and instructions for traveling with wheelchairs or other mobility devices.

>>Read: What to Pack For a Trip: Travel Packing Checklist for Carry-On Only 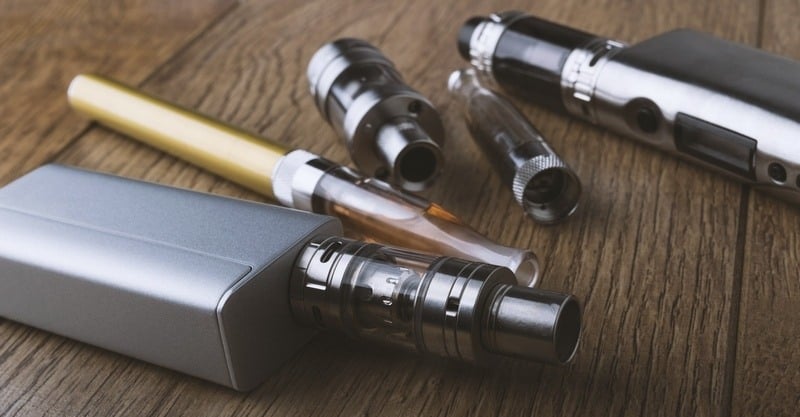 Vapes and e-cigarettes are allowed in carry on luggage. In fact, if you’re traveling with a vaping device or e-cigarette, it is required that you pack it in your cabin baggage.

However, you are NOT allowed to use them or charge them while in flight. Make sure the vape is packed in a way that it can’t accidentally turn on.

Vapes and electronic cigarettes are not permitted in checked luggage at all, even if you remove the battery. Read more about taking a vape on a plane here and bringing a lighter on a plane here.

Can you take a power bank on a plane?

A power bank, sometimes referred to as a portable phone charger, is something many of us don’t leave home without. It’s basically a small portable power source that you use to charge up your phone or tablet without needing to plug it into the wall.

In fact, the TSA website says “NO” for packing power banks in checked luggage, and than clarifies by saying, “Portable chargers or power banks containing a lithium ion battery must be packed in carry-on bags.”

Can you take phone chargers in hand luggage?

A normal phone charger is the wire and plug that attaches your device to a wall outlet to recharge it. These are allowed in your checked luggage or hand luggage.

I always recommend packing them in your cabin bag. If your checked bag gets lost or delayed, you don’t want to run out of power.

Sometimes people refer to power banks as phone chargers. As mentioned above, power banks are allowed on a plane, but only in cabin bags.

Can you bring a suitcase with a battery on a plane?

Suitcases with batteries in them, often called Smart Luggage, are appealing to many people because it allows them to charge up their devices right from their suitcase. Some of them even have GPS tracking.

But due to safety rules regarding lithium batteries on planes, there are a few things you need to know before flying with this kind of suitcase.

A suitcase with a battery in it cannot be checked unless you remove the battery and take the battery with you in your carry on luggage. If the battery cannot be removed, the suitcase can’t be taken as checked baggage and can’t be placed in the hold of the aircraft.

Smart luggage that is carry on sized is allowed in the cabin of the aircraft. But you still need to remove the battery before boarding the plane, and typically the battery must be 100 watt hours or less.

You should check with your airline before bringing one of these suitcases to the airport since the airline might have stricter rules than TSA.

A word on recalled batteries and devices

If you have a battery or electronic device that has been recalled, don’t travel with it. It won’t be allowed on the airplane, usually due to safety risks.

Often these batteries or devices have been recalled because of the risk of overheating or catching on fire, which is obviously something you don’t want to happen on an airplane.

Some recent examples include the Samsung Galaxy Note 7 phone that was banned a few years ago, and more recently, certain models of the Apple Macbook Pro have been banned. When these types of bans are in place, you are not permitted to bring the device in checked or carry on luggage.

Hopefully this answers all your questions about flying with batteries on planes! 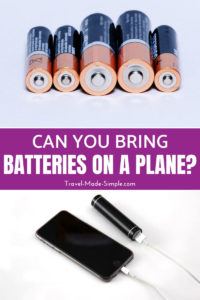