Can you bring a lighter on a plane?

There are certain TSA guidelines you must follow. Keep reading for details about lighters in hand luggage and lighters in checked luggage, plus info about matches on a plane.

Bear in mind that smoking is never allowed on board and could land you in jail. 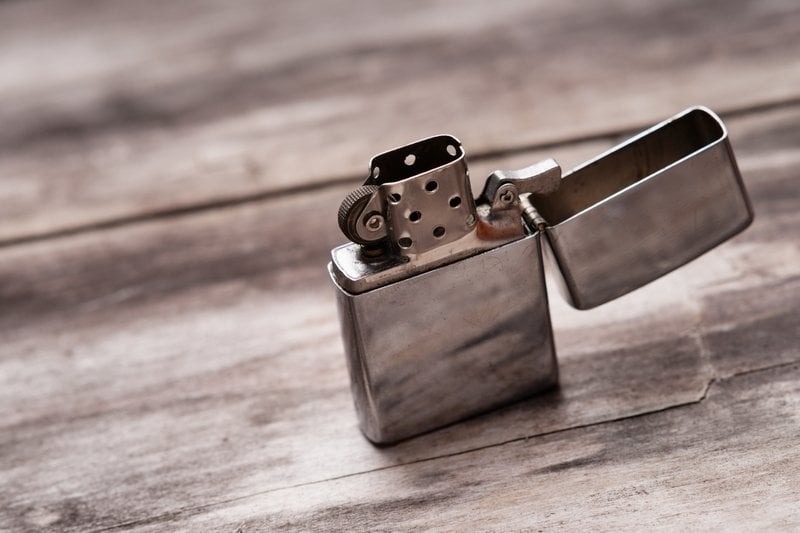 So can you take a lighter on a plane?

The surprising answer to this question is yes. But only certain types of cigarette lighters are allowed on a plane, and only in some circumstances.

Bringing a lighter on a plane in carry on

Cigarette lighters are allowed in carry on bags as long as they are disposable or Zippo type lighters. They can still have fuel in them as well.

However, TSA does not allow arc lighters, plasma lighters, electronic lighters, or e-lighters in carry on luggage.

They also don’t allow torch lighters, gun lighters, or any kind of lighter that looks like a weapon. Stick to the basic disposables, like Bic lighters, or Zippo lighters.

Extra lighter fluid is not allowed in your carry on either. If you need more than the amount in your disposable lighter, you’ll have to buy more once you arrive at your destination.

You’re also not allowed to take the cigarette lighter out while in flight, so either keep it in your pocket or in your bag. Taking it out while in flight could pose a fire risk or be seen as a threatening act, so don’t remove it.

>>Check it out: Can you take batteries and power banks on a plane?

Taking a lighter on a plane in checked baggage

Due to fire hazard, you can’t take a lighter on a plane in checked baggage, unless the have no fuel in them. Keep in mind that even one drop counts, so even if you think it’s empty, security might think differently.

Extra lighter fluid is also not permitted in checked luggage since it poses a fire risk.

If you do want to take a lighter in your checked bag, you are allowed to take a maximum of two, but only if they are packed in a DOT approved lighter case.

Like with your carry on bag, arc lighters, plasma lighters, electronic lighters, e-lighters, gun lighters, and torch lighters are not permitted in checked luggage at all.

So even if you have a DOT approved case, these types of lighters are still not allowed on an airplane.

>>Do you use a vape? Read about taking a vape on a plane.

Can you bring matches on a plane?

With all the rules about bringing a lighter on a plane, it might seem easier to take matches. So if you’re wondering, can I bring matches on a plane, it depends on the type of matches and where you’re packing them. 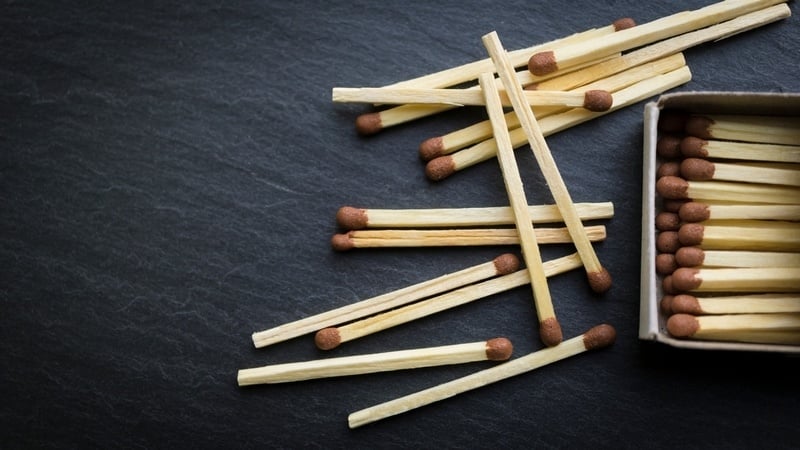 Matches on a plane in carry on luggage

TSA allows one book of safety matches in your carry on bag. Don’t pack more than that though, or they are likely to be confiscated at the security checkpoint.

Like with the lighters, leave these packed away in your bag while on the plane. You can’t use them on board anyway, and you don’t want someone getting the wrong idea.

Strike-anywhere matches are not permitted in your carry on, so leave those at home.

Matches on a plane in checked baggage

Since matches pose a fire threat, they are not permitted in your checked luggage at all. This includes both safety matches and strike-anywhere matches.

Either pack them in your carry on bag or leave them at home.

>>Read: Can you bring a razor on a plane?

Can you bring cigarettes on a plane?

If you’re a smoker, you probably have your favorite brand of cigarettes.

Luckily you can take cigarettes on a plane in your cabin luggage or checked luggage. You can also take chewing tobacco, pipe tobacco, or cigars on a plane.

Flying internationally could come with some extra restrictions. Most countries have a limit on the number of cigarettes you can bring into the country, so be sure to check the customs laws for your destination.

The same applies when flying into the US from another country.

In most cases, you are only allowed to bring 200 cigarettes with you when entering the US. Keep that in mind if you decide to buy cigarettes while on vacation in another country.

And remember, you cannot smoke in flight!

Virtually all airlines around the world forbid smoking while on board the aircraft, so don’t even think about lighting up. This applies to smoking cigarettes, pipes, cigars, vapes, etc.

Some airports have designated smoking areas or rooms so you can get one last puff before your flight. Look for them on the airport’s map or ask an employee where you can find a smoking area.

>>Find out: Can you take aerosols on a plane?

Can you bring cigars on a plane?

Just like with cigarettes, you can bring cigars on a plane. They are permitted in both carry on baggage and checked baggage.

Due to the pressure and temperature changes that occur in the hold of the aircraft, you might not want to pack cigars in your checked baggage though. It’s recommended that you pack them in your cabin bag instead.

You should also pack your cigars in a hard case to prevent them from getting crushed.

Cigar cutters are a bit of a gray area. They are technically a blade, so security agents might want to confiscate them. Your best bet is to pack it in your checked luggage.

Another thing to be aware of is customs. If you’re traveling overseas and either bringing cigars with you or bringing cigars back from vacation, make sure you know the rules about how many cigars you’re allowed to bring into the country with you.

This is especially important if you’re bringing Cuban cigars into the US. Know the rules to avoid potential fines and getting your cigars confiscated.

Can you bring other flammable items on a plane?

I think this goes without saying, but flammable liquids, gels, gases, and other items that could easily ignite are too dangerous to take on an airplane.

Here’s a list of items that are NOT permitted in either carry on baggage or checked baggage, and keep in mind that this is not an exhaustive list:

They will get confiscated, and you could even get in trouble for trying to travel with these kinds of things. Even replicas of explosives, such as toy versions or fakes, are also prohibited on airplanes.

Don’t bring these at all, not in carry on bags or checked bags.

Gel candles are not allowed in carry on luggage, but you can pack them in your checked luggage. Normal wax candles can go in either carry on or checked baggage.

Flying with a lighter or matches

The rules surrounding flying with a lighter or matches are there to keep you safe. The very purpose of these items is to make fire, so the limitations help prevent an emergency situation.

If you’re worried about a special lighter being confiscated, I’d recommend flying with a Bic lighter or a simple book of safety matches. Otherwise, you could easily pick up a lighter once you land at your destination to avoid the hassle completely.

And remember, these are just the TSA rules for flying in the US. Other countries around the world could have stricter rules and not let you take lighters or matches on a plane at all.

Hopefully this answers all your questions about bringing a lighter on a plane and flying with matches! 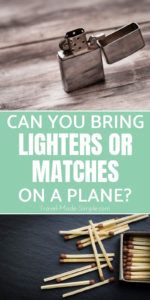