This is part of a series of interviews with inspiring travelers. Today’s interview comes from Carmel Montgomery about her Mongolia Gobi Desert tour. All photos provided by Carmel. See more about tours and tour reviews here.

My husband Shawn and I traveled for a year, starting in September 2013. Although we had both previously traveled and lived abroad at points in our lives, we had never traveled internationally together.

During our year of travel, we hit 14 countries, our favorites being Thailand, Vietnam, and Spain. Although that list changes depending on the day. 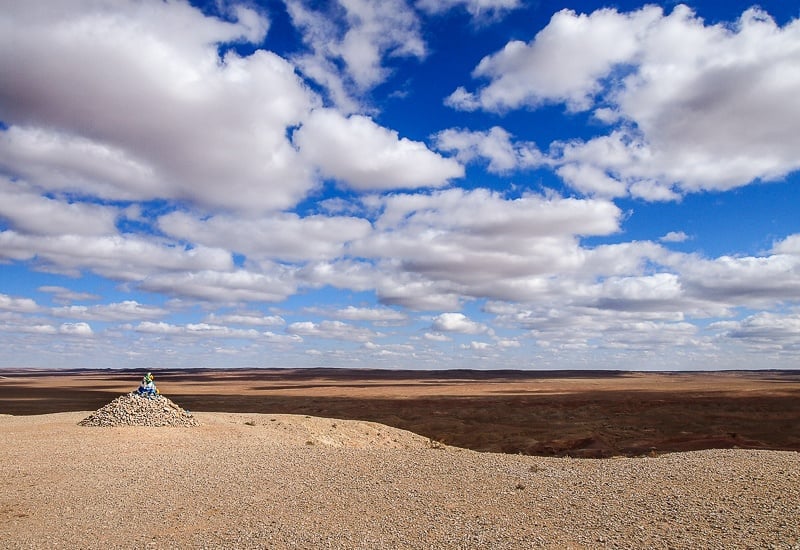 We took a tour in the first country where we landed – Mongolia. Shawn was in the Peace Corps in Mongolia about 10 years earlier and he knew we had to go spend some time in the Gobi Desert, but the Gobi Desert isn’t just a place you just take off and see on your own.

Since there are no roads, it’s easy to get lost. We ended up settling on the seven-day tour. Five days didn’t seem like enough, and nine days (without a shower) seemed like a bit much.

Full disclosure, we went with our friend Manlai’s tour company, Manlai’s Budget Tours. Shawn had befriended Manlai when Manlai was about to go to University and helped him learn English during their friendship.

Somehow, after all these years, they stayed in touch. Since it was the first place we were going on our round-the-world trip, I would stare endlessly at the places we would be going on the website and imagine what it would be like to be there.

As I mentioned, Mongolia was our first stop. Although Shawn spent two years living there, we knew better than to try to navigate the Gobi Desert alone.

Our first day on the tour, we drove for about four and a half hours – only an hour of that was spent on paved roads. I don’t really know how our driver knew where to go to get us to our first host’s ger (yurt), but he got us there. 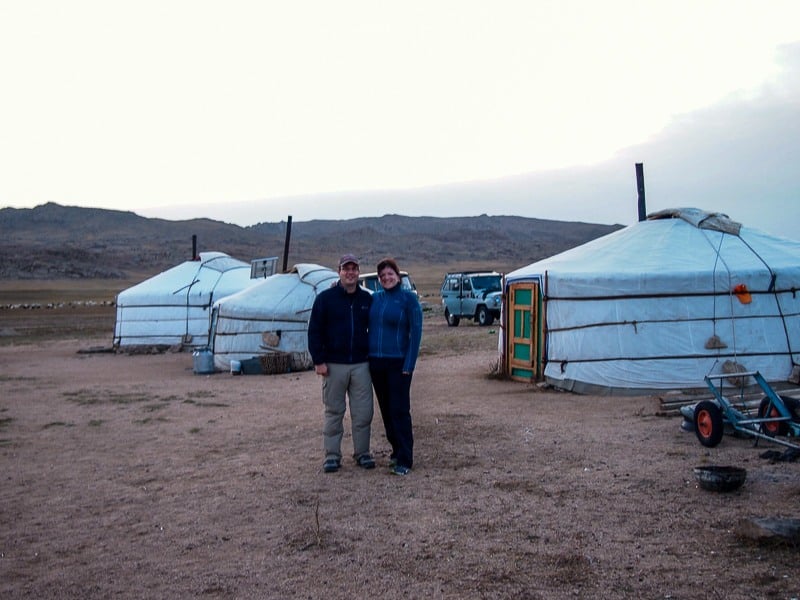 What did you like about the Gobi Desert tour? What was your favorite part?

Surprisingly, one of my favorite parts of the tour was meeting the other people in our group. We like meeting new people, but we were about to be stuffed into a Russian van for a whole week with four strangers, a tour guide, and a driver. It felt a little overwhelming.

Maybe it was the knowledge that we’d be sitting across from each other for hours each day, but we all clicked immediately.

Our guide and driver were just as much a part of our group as the other girls (poor Shawn). At the end of the week, it felt weird not to be seeing them every day.

Besides the group dynamic, we also loved staying with locals and getting to see real life in Mongolia.

There are still plenty of nomadic people outside of the capital and getting a glimpse into their lives was fascinating. They were paid for letting us stay, of course, but we appreciated the opportunity to be part of their lives for a night.

Oh, and the stars. You’ve never seen that many stars in your life. I guarantee it. 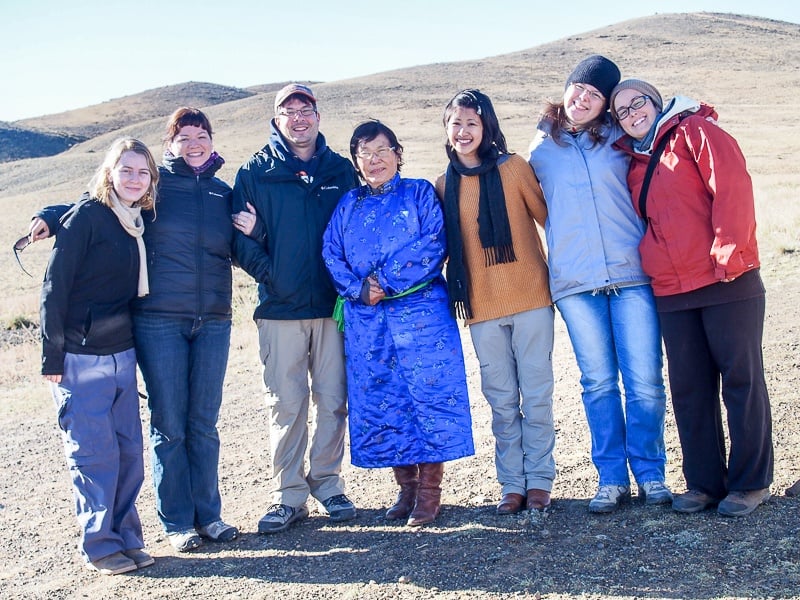 What was the most memorable or eventful part of your trip?

On our second to last day, we were at some dunes – I don’t even know where we were, to be honest. They were about 400m high.

We were all staring at them with awe and then our guide said, “do you want to climb them?” Uh…sure? I was pretty out of shape and the sand was so soft that for every step, you fell back a half step. But we gave it a go.

Only three of us made it to the top.

I stood at the top of that dune, an hour after beginning, and couldn’t believe a) what I had accomplished, and b) what I was seeing.

We were straddling a point at the top and just staring out at nothing but sand for miles. Shawn took some pictures of us from below and you can just barely make out the little dots on the top of the hill.

Whenever I start to doubt myself, I look at that picture and think, “I did that.” 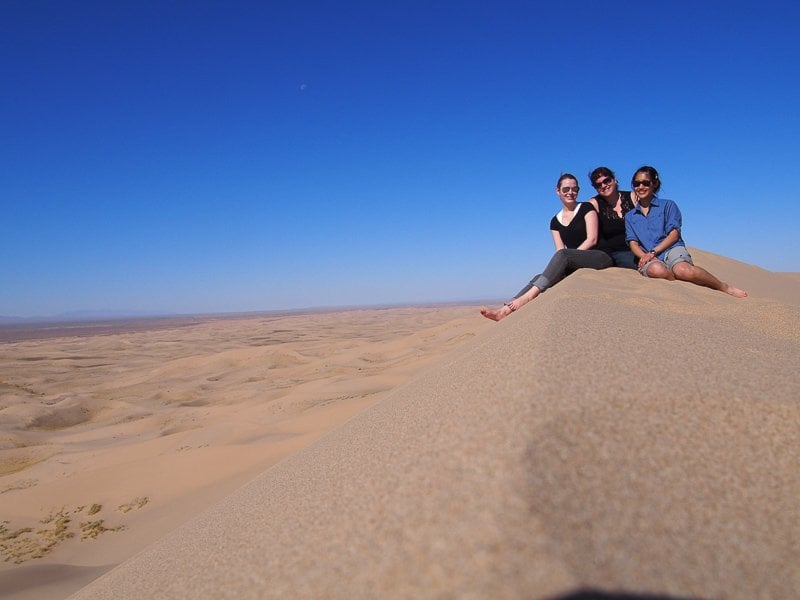 Driving on nonexistent roads, through grassland, in an old Russian van took some getting used to. I wouldn’t recommend it to anyone with hip or back problems.

The first day, I got carsick and had to come up with a strategy for the next six days. I knew it wouldn’t get any easier.

We spent a good chunk of the day in that van. I found a combination of enough water, a little to eat, and a travel sickness pill got me through the rest of it just fine.

Ha ha…no. This is Mongolia. Sorry, but they are not known for their food.

What inspired you to take a Gobi Desert tour or travel to Mongolia?

Obviously given that Shawn had lived in Mongolia, we knew we had to go there on our trip. I had heard so much about the sky. We think in the States that Montana is Big Sky Country. Mongolia’s got it beat. Have I mentioned the stars??

I would highly recommend this tour. And ask if I can go with you. I was so impressed by our tour guide’s knowledge and personality. I am still in awe of our driver’s ability to get us from place to place.

We also had a belt break in the middle of the desert. Before any of us knew anything was going on, he had us pulled over and the belt replaced in about 15 minutes.

I felt really well taken care of, as well as impressed by all that we saw in a week. The only thing I would change is probably going a bit longer. (Side note: we did get showers about midway through the week. It was heaven.) 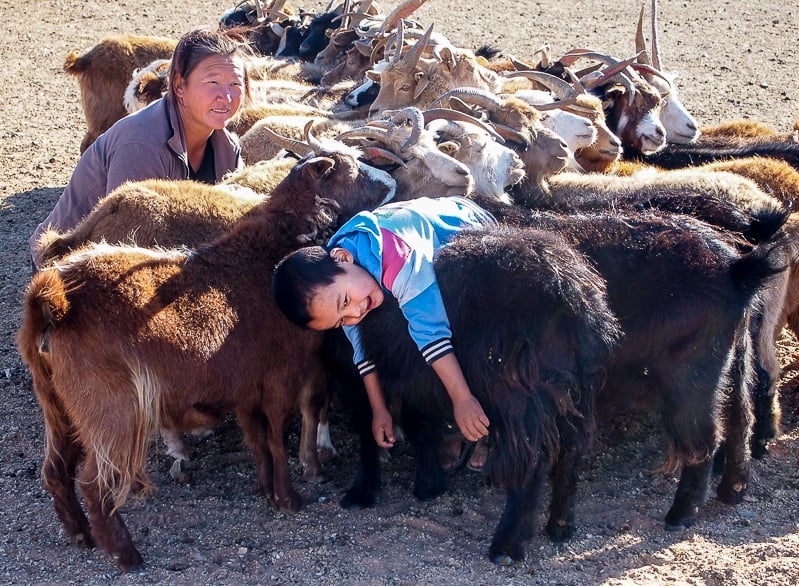 Absolutely! I was a new traveler. It was a perfect combination of being cared for and having real experiences.

Mongolia can be a little intimidating to a new traveler, but this was a good introduction to the country and its culture. We started the tour about three days after we arrived, so I can honestly say it’s good for anyone.

Check out this tour of Mongolia with G Adventures.

Bio: Carmel Montgomery is a world traveler who used to blog at The Journey Itself and has resettled in the Pacific NW of the United States to start a family and a new career.