This is part of a series of interviews with inspiring travelers. Today’s interview comes from Lauren about her Mexico Monarch butterfly tour. See more about tours and traveling with purpose here. All photos are by Lauren except Pinterest image.

I’m technically not a traveler, but rather I’m based in Mexico City and have been for six months now; I would definitely consider myself someone who likes to have a temporary base to call home, rather than being permanently on the road.

As for places I’ve visited, Mexico is definitely the country I know (and love) the best. In fact, when I first arrived in 2014, my goal was to visit all 32 states over the course of the year before returning to university, which…failed miserably.

I only ended up making it to around 14! However, I’ve revitalized that initial effort and am aiming to visit the remaining 18 states before I leave for Colombia in September. 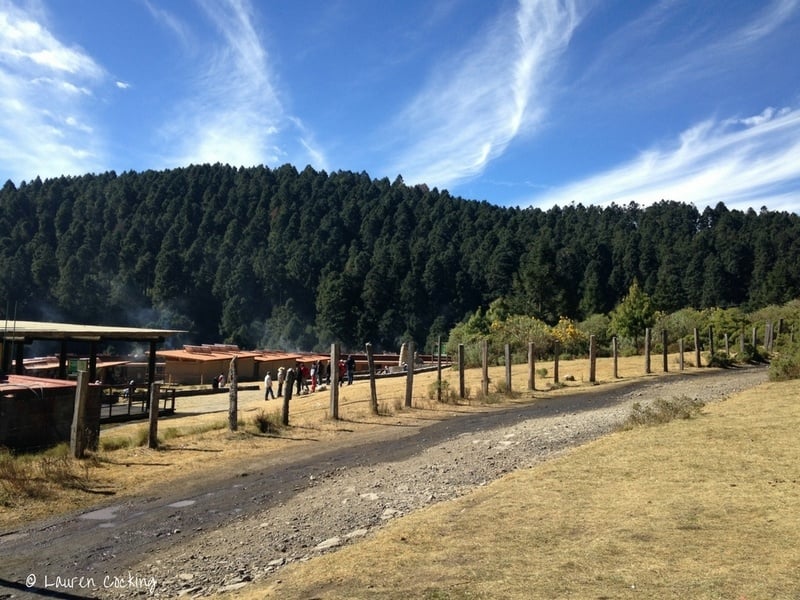 The tour I went on was just a day long trip from México across to the neighboring state of Michoacán to see the annual migration of the beautiful Monarch butterflies in the Santuario Sierra Chincua.

After leaving at 6.30am (!), we arrived about four hours later and hiked 1km with our tour guide up to where the butterflies were clustered most heavily on the towering pines.

Afterwards, we had lunch overlooking the Sierra, before piling back into the minivan and heading to Alternare, a non-profit organization that teaches techniques of sustainable living and agriculture.

Here we were given a tour by one of the farmers, as well as an eco-friendly lunch made entirely of products grown or raised at Alternare.

I travelled with Báay Tours, a relatively fledgling company run by Ricardo Magos. It was actually the first time I’d gone with them and it was only because the friend I went with stumbled across their page on Facebook!

I reached out to ask for prices, explaining I was a travel blogger and that this would be my first eco-friendly travel experience, and Ricardo replied immediately and offered me a discounted rate.

We’d looked into travelling to one of the several Monarch butterfly reserves that are dotted around that part of Mexico and there were no direct routes which would take us there.

Instead of paying around the same and spending a ton of time waiting for buses, we thought an organized tour would just be a far simpler way to see the butterflies. The added bonus was the chance of meeting some new people along the way!

What did you like about the Mexico Monarch butterfly tour? What was your favorite part?

My favorite part about the tour was actually the other attendees. They were incredibly open and chatty, with a similar mindset to me and my friend, and it was them who made the day seem less of a tour and more of an experience among people who’d been friends for a while.

I also especially appreciated the way they gave us enough time to eat and planned plenty of stops at bathrooms both on the way there and back. It seems so insignificant, but so many tours will neglect the fact that you need to stretch your legs a bit and grab something to eat, so I really appreciated it.

What was the most memorable or eventful part of your Mexico Monarch butterfly tour?

The most memorable part of the trip was definitely the view out over the sierra from the mirador; it was just so beautiful and literally looked like a picture. Aside from that spectacular view, I’d have to say that holding the turkey egg that was only half way hatched was a pretty cool novelty!

I think the actual time with the butterflies was quite short and I expected to see more of them. However, I doubt that was less to do with the tour and more to do with the day we went to visit.

Because they move around based on the weather patterns and other external factors, often you don’t get to see them in abundance or in their full orange-hued glory.

Did you eat anything amazing on your tour?

Honestly, all the food that was consumed that day was so, so good! As part of the tour, lunch at Alternare was included and we were treated to perfectly cooked Mexican rice with meatballs, accompanied by guava juice and bananas doused in condensed milk and cinnamon for dessert.

At the Santuario, lunch wasn’t included but there were plenty of cheap dining options in the vicinity. A tip from our tour guide pointed us in the direction of a place that served up some amazing tlacoyos (kind of like the Mexican equivalent of a pitta bread), stuffed with cheese, crema, and the filling of your choice.

What inspired you to take this Mexico Monarch butterfly tour?

Seeing the Monarch butterflies is something I’ve always wanted to do in Mexico and I literally just never got round to it the first time I was living here.

When I came back to Mexico City, I told myself I’d definitely see them but before Christmas (they start arriving in November) but I was just so busy I didn’t get chance. As I’m heading to Colombia in September, I knew it was now or never as by March they’re gone.

Would you recommend the Mexico Monarch butterfly tour? Would you change anything about it?

I would wholeheartedly recommend this tour, as it gave me the chance to try sustainable travel with the visit to Alternare. I ticked seeing the Monarch butterflies off my list and I also spent the day with some incredible people who I hope to get the chance to travel with again in the future!

Do you think the Mexico Monarch butterfly tour would be good for a new traveler? Why or why not?

I would say this is a great tour for a new traveler, although it was conducted entirely in Spanish (I don’t know if there are English or other language options). Therefore, I would say go for it if you speak Spanish to a decent degree.

If not, email the tour organizer Ricardo (who I hear speaks English and German, as well as dabbling in Mandarin) to see if he can arrange something for you.

Check out the Facebook page for Báay Tours for more info on this Mexico Monarch butterfly tour.

Or search for more tours in and around Mexico City on Viator.

Author bio: Lauren is a Mexico City based travel blogger at Northern Lauren who writes (mainly) about Mexico, food and feminism. While she loves writing about other people and places, she also thinks there’s nothing more horrifying than putting together a humble yet engaging personal bio. Find her rainbow coloured pictures and pins on Instagram or Pinterest, or follow her irreverent thoughts on Facebook and Twitter.