The only Hungarian food I knew about before visiting Budapest was goulash. Since Andy and I love food tours, we booked one for our visit to Budapest and learn more about their cuisine. We booked the tour for our second day since food tours usually provide suggestions for other places to eat, and this one was no exception. Here’s what to expect on the Budapest food tour. 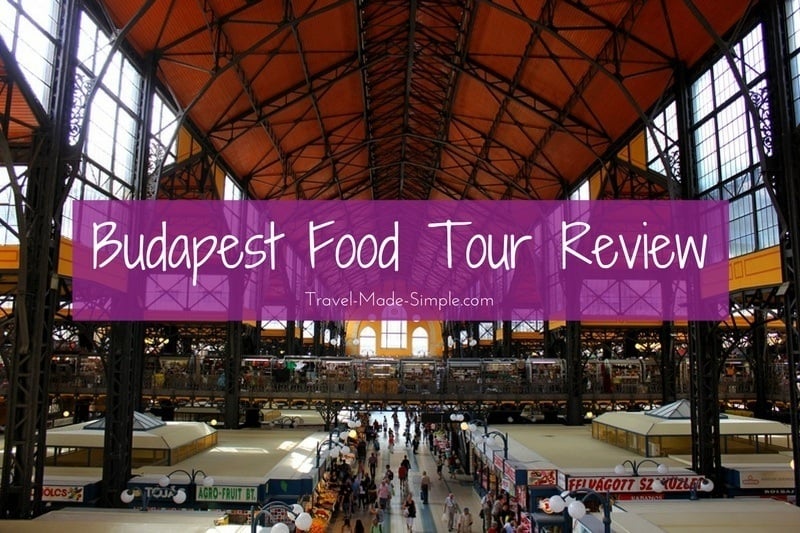 Markets are a great part of food tours

The Budapest food tour started at the Central Market Hall. When we look for the perfect food tour, we try to find ones that include a market visit because markets are so interesting and such a big part of the local daily life.

This one was built in 1896 and continued to operate even during communist times. It has several levels, and vendor sell fruits and vegetables, meats and cheeses, spices, alcohol, and lots of other food products.

There are also a handful of vendors selling non-food items, and a bunch of stalls selling prepared and ready-to-eat meals. 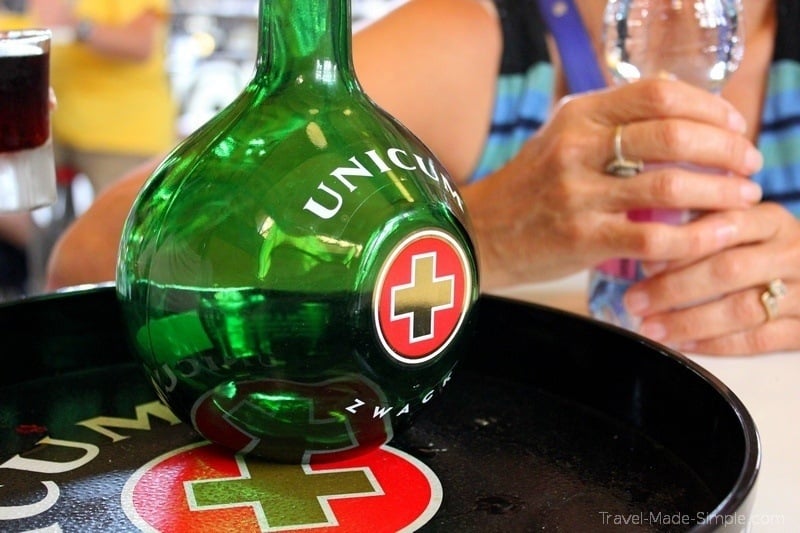 Our first tasting of the tour was Unicum, a traditional Hungarian digestive liquor with an interesting backstory.

The communist government forced the family who originally made Unicum, the Zwack family, to give them the recipe during the communist era. However, the family didn’t want to divulge their secrets, so they gave a fake recipe and then fled the country.

After many years when communism in Hungary had ended, the family returned and restored the liquor to its original recipe.

This delighted everyone who had been drinking the fake stuff for so long, although younger generations who had never tasted the original were a bit disappointed in the change from what they were used to.

The next traditional food we tried was langos. It’s a bread-like dough with toppings, usually garlic but often other toppings are available.

The smell of the garlic was heaven as we waited for the doughy goodness to finish cooking. This was one of my favorite foods of the tour.

I know horse might sound odd, but it’s more normal to eat in other parts of the world, so I felt I should try it. It wasn’t bad, but my favorite was the spicy pork salami.

We also learned that there is a breed of pig in Hungary that’s fuzzy, almost like sheep’s wool. This breed is apparently more healthy to eat because the meat is lower in cholesterol, an important quality for a country that eats so much meat. 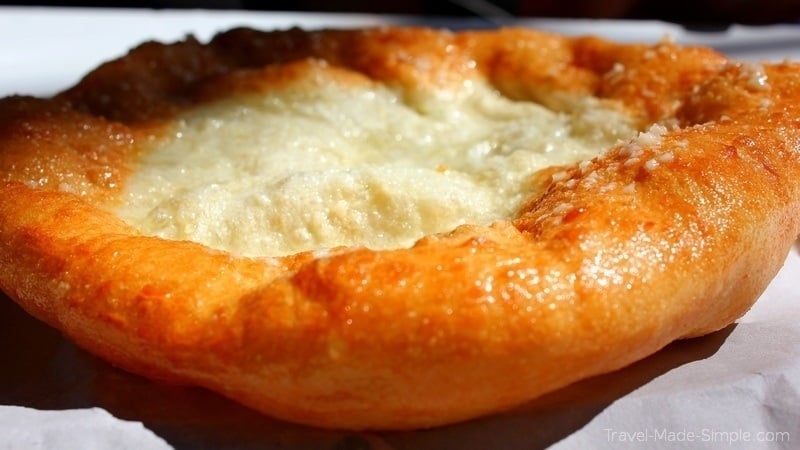 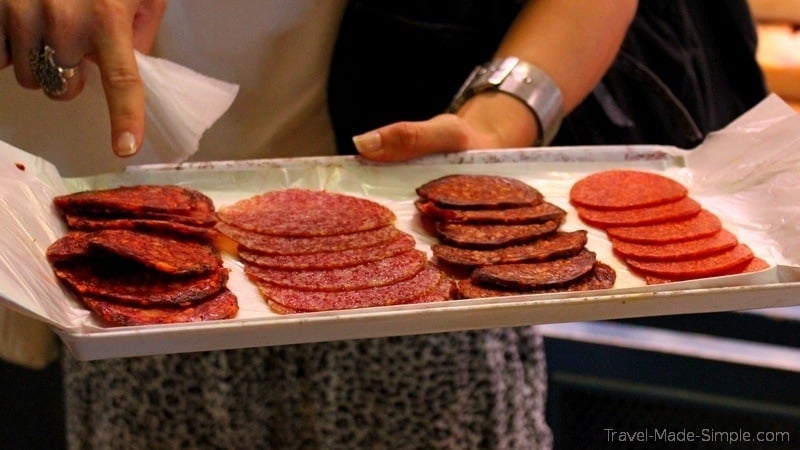 After trying some cheese and seeing a few other areas of the market, we left and wandered through the university area. Soon we stopped at a popular lunch spot. The restaurant was once a butcher, but now they serve a variety of meats, potatoes, and other sides to a happy crowd.

Our guide ordered duck, turkey, potatoes, rice, a few veggies, and some other side dishes to split among our group. Andy and I liked this place so much we went back a few days later for lunch again.

This is why food tours like the one we took in Budapest are so great. They can introduce you to restaurants you never would’ve found on your own, which can really enhance your trip. 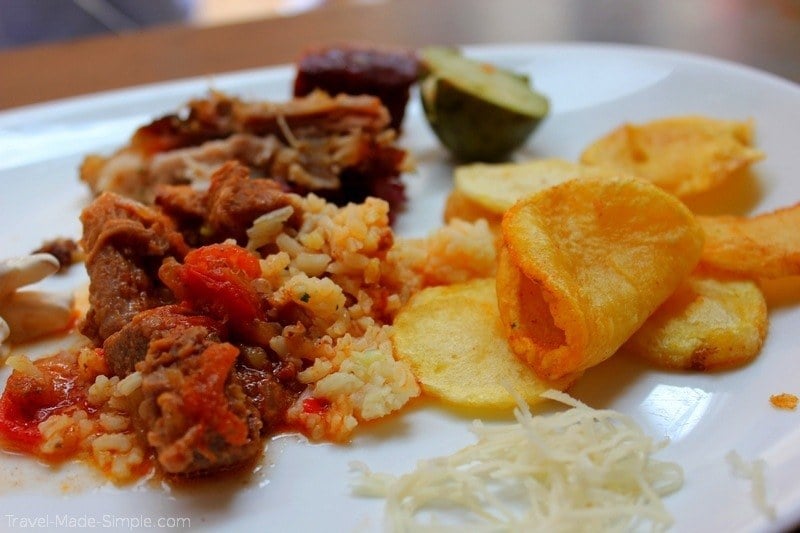 We didn’t have much room left in our bellies, but after lunch our guide took us to an elegant cafe where we tried several kinds of cake. They were so sweet and tasty, I did my best to ignore how full I was already. Totally worth it.

After that, we visited a candy shop where we watched them roll out the soft flavored sugar on warm marble slabs to make the candy. The store was filled with lollipops and a wide variety of hard candies, and we made full use of the free sample bowl before purchasing a few little bags of treats to take with us.

The tour ended with a wine tasting at a cafe that served us three different types of Hungarian wine. The country is well known for its wine, and I could understand why after trying these. 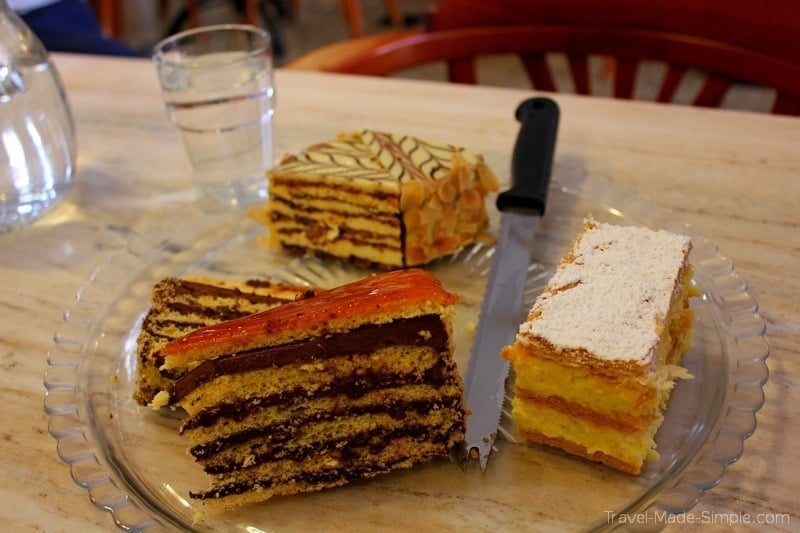 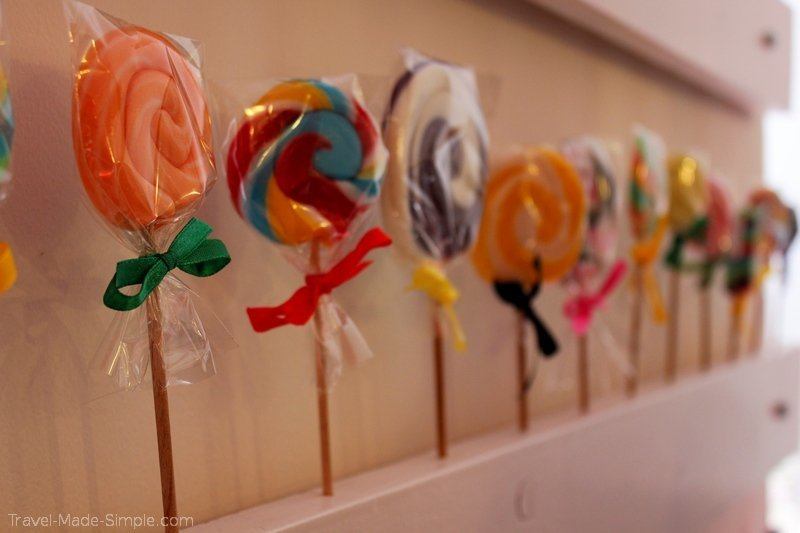 Why you should take the Budapest food tour

In my opinion, this food tour is one of the best things to do in Budapest. Not only did we get a chance to experience and learn about the cuisine, but we got to see a part of the city we might not have thought to explore on our own.

The group size on our Budapest food tour was one of the smallest we’ve had, which was excellent. The maximum size is six people plus the guide, and it made for a more intimate experience.

There was so much food on this tour, we could barely eat dinner several hours later. A good food tour provides plenty of food so you can experience the cuisine, and this one fit the bill.

We also loved that the guide handed out a list of the places we visited on the tour, plus a separate page filled with more suggestions for restaurants, cafes, and bars to try out during our vacation in Budapest.

Food tours open you up to experiences you wouldn’t have on your own, and it’s one of the best reasons to take one. The Budapest food tour was the highlight of our week in Hungary’s capital. 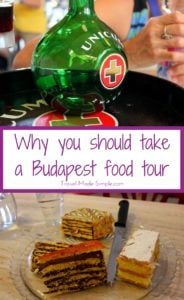